When you combine world-class engineering talent, a high-spec workshop and plenty of enthusiasm, you’ve got everything you need to restore a beautiful piece of automotive history to its former glory… 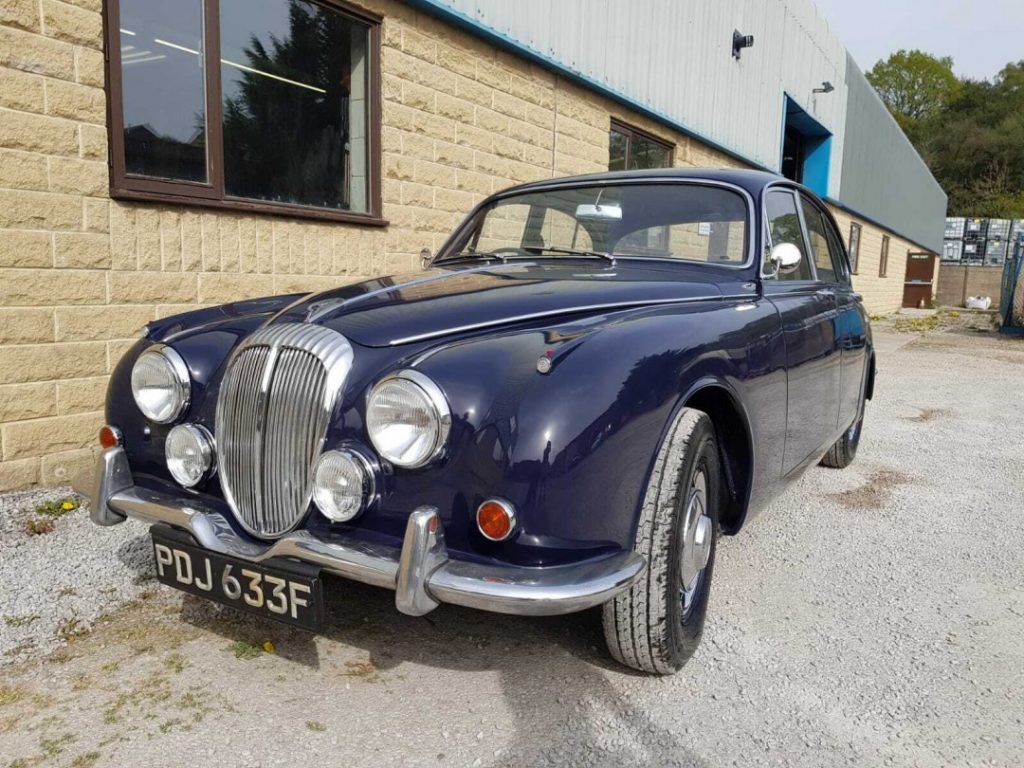 The engineers at Rotaflow took on a passion project in their spare time, fully restoring a derelict 1968 Daimler 2.5 V8 250 Saloon to perfect working order over a period of three years. Taking over 3000 hours, the 1968 Daimler restoration has been a complete labour of love for the team.

They took the car right back to bare metal, restoring the original bodywork with old fashioned tried and tested hand work skills. The car has been rebuilt to original factory standards.

Originally the team hoped it would be a quick fix, but years of being sat in a garage had taken its toll on the 51 year-old Daimler. The bodywork had suffered extensive rust damage and seals had worn away.This wasn’t going to be a quick job – to do it properly (the only way Rotaflow know how!) was going to take a LOT of man hours.

The decision was made to take the whole thing apart and start from scratch.

When the Daimler was originally made, it was one of the finest cars of its generation. With its powerful V8 engine it boasted power and performance that defied its more executive and statesman-like aesthetic. The goal was to restore both the looks and performance of the car, so it would be both roadworthy and a fantastic car to drive.

The restoration had to be as sympathetic to the original as possible, so all original parts that could be obtained were used. 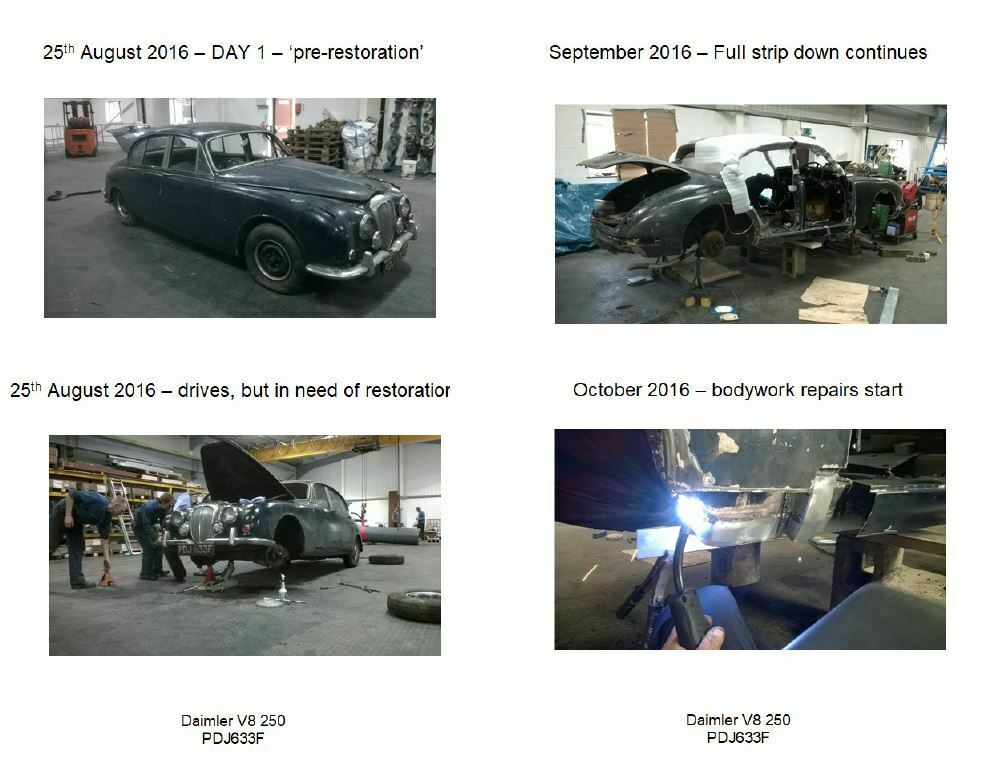 In some cases we couldn’t get hold of original parts (it’s a 51 year old car after all), so our highly skilled engineers made them from scratch to the highest possible standards.

There were no time or budget limits on the project, so nothing was rushed or half-baked. The entire project took over 3000 hours!

The engine was stripped, cleaned, de-coked to remove decades of oil and carbon build up and then carefully re-built. It was this attention to detail that took so long, but it also means the car was essentially re-born – this wasn’t a basic touch-up job, this is a full restoration in every sense of the word.

The interior of the car wasn’t spared any attention either… 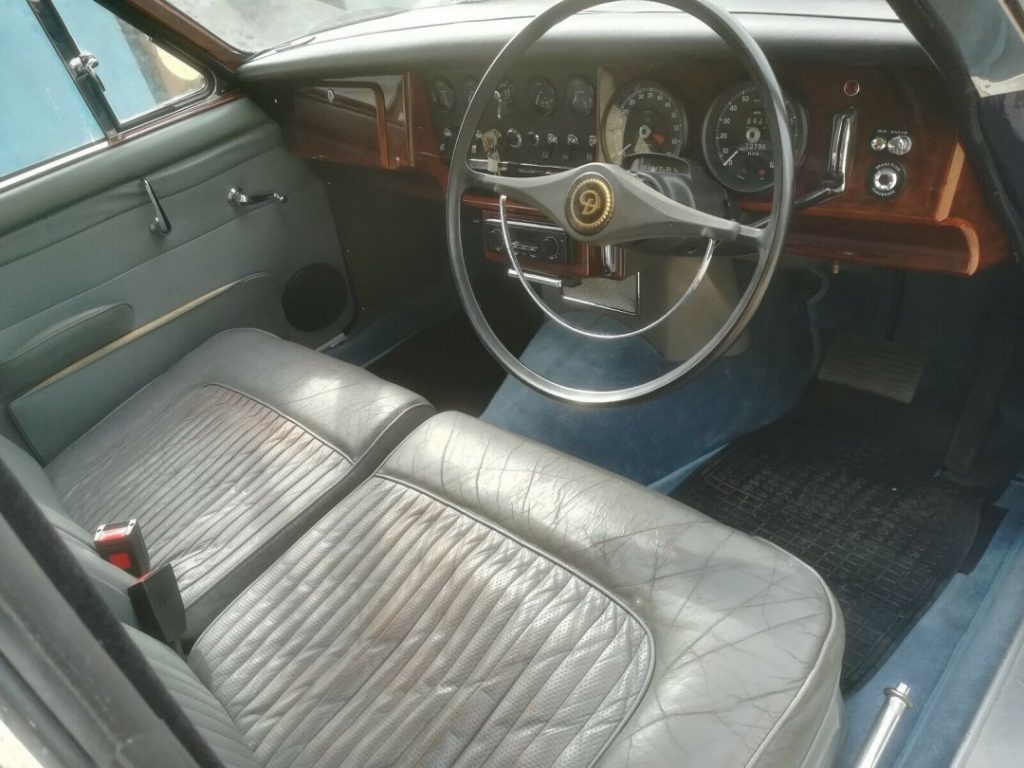 The original Daimler had beautiful veneered wooden interior, so the engineers removed it all, re-veneered it and replaced it. The interior carpets were beyond repair, so they were completely removed and replaced with a luxury interior carpet, which sets off the whole look of the car.

The seats were cleaned and restored, so you can sit in perfect comfort on the original bench seats, again hinting at the level of luxury this car has.

The radiator was sent away to be professionally re-cored and repainted to as new condition, so you’ll never go over hot or cold when out for a drive. This really is a car for all ages and seasons.

The rest of the car that didn’t need any engineering has been fully removed, restored and refitted. There are brand new tyres, new bulbs, all fluids have been drained and re-filled and all fixtures and fittings tightened and re-sealed.

No stone was left unturned on this project, as you’ll be able to see from the pictures. 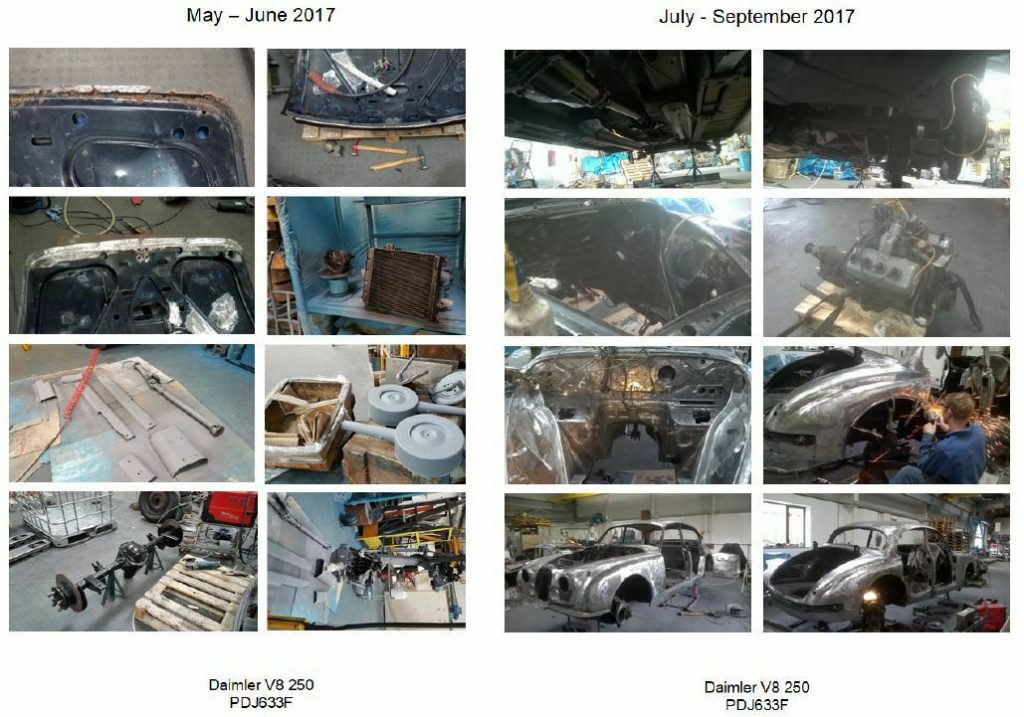 The car has been re-painted on site back to its original Daimler colour. To look at the car is to look at history – it’s almost exactly as it would have looked from the production line, but with improved engineering and higher-quality parts, fluids and carpets!

The team have worked with painstaking accuracy on this project, wanting to be both sympathetic to the original car and ensuring the work has been carried out to the highest possible standards. In many ways it is an advert for the craftsmanship and talent of our team, so we wanted to produce a restoration that we could be proud of. We’re satisfied that we have done an outstanding job with this 1968 Daimler restoration and whoever buys the car will be the proud owner of a wonderful car that has been fully restored to its former glory.

These images are a snapshot of the journey the car has been through in its time with the Rotaflow engineers. 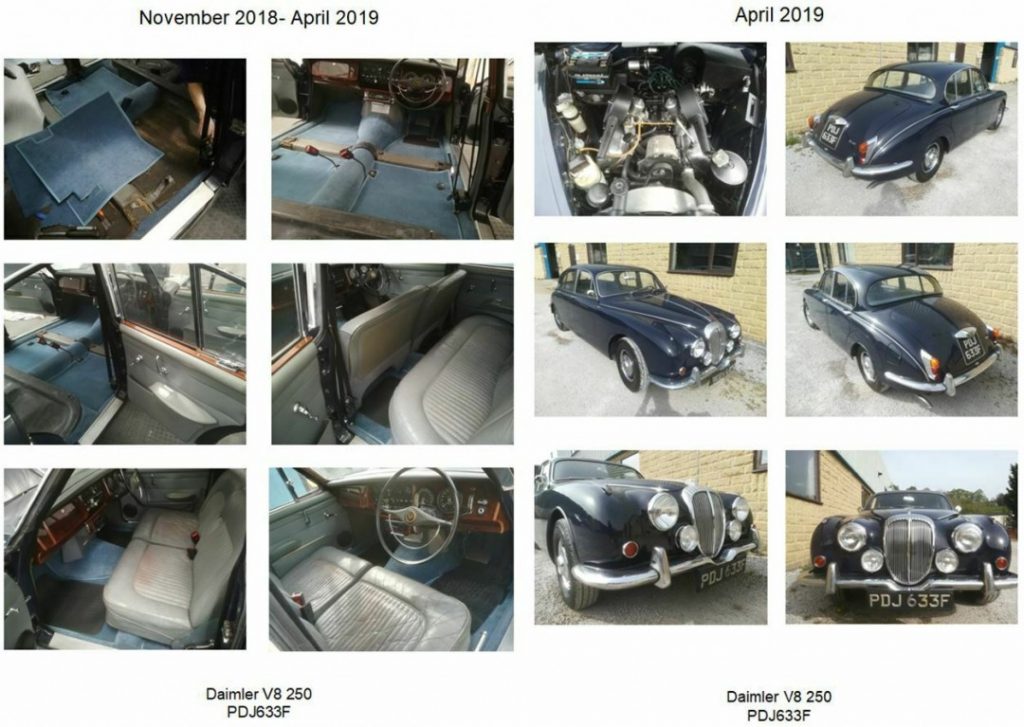 Is the Daimler Road Legal?

Despite being MOT exempt, it was taken to an independent garage for testing – this allowed the engineers to check that the work they had done was up to scratch and it also meant that any buyer of the car would have their own peace of mind that the work done is of the highest standard.

Additionally, as a classic car it is tax exempt.

Why Did Rotaflow Engineers complete a Daimler Restoration?

For fun, mostly! A chance to put the skills our engineers have to another use wasn’t one we wanted to turn down.

We have no plans to venture into the classic car business, but it’s great to know that the skills our company has are transferrable to other fields of engineering. It’s also a way for the guys to get their teeth into a project that’s out of their normal day jobs.

If we do anything, we do it to the best of our abilities. Restoring classic cars included. 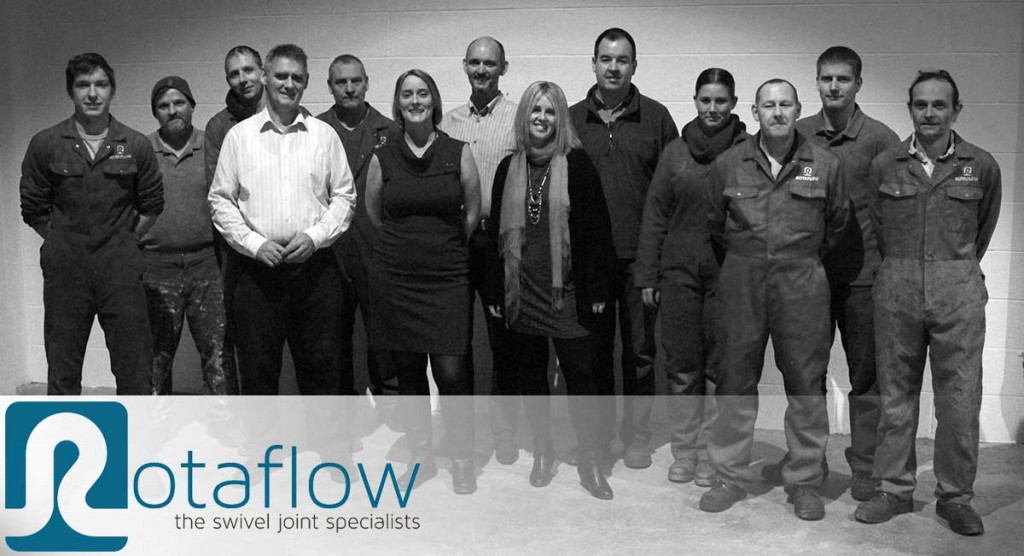 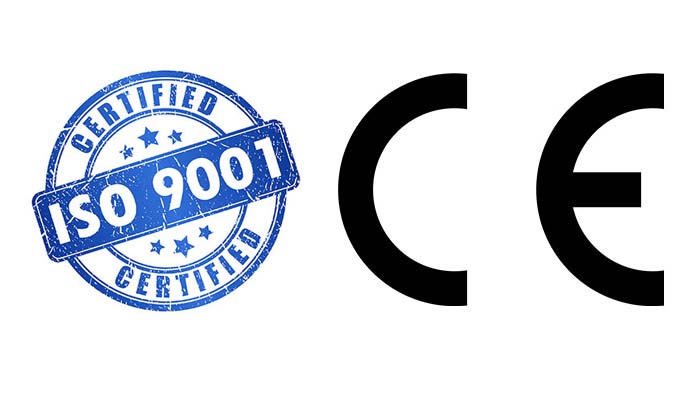 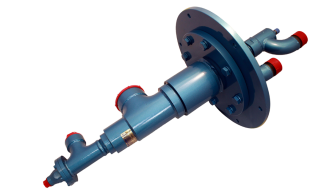 Not sure which range would best suit your requirements? Let us do the hard work, simply fill in an enquiry sheet and we’ll get back to you with the optimum swivel joint for your needs. Please … END_OF_DOCUMENT_TOKEN_TO_BE_REPLACED 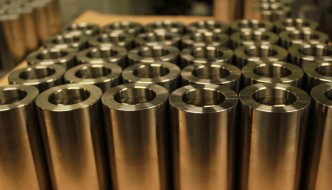 Rotaflow is always looking for talented staff to join our team. If you have seen a position advertised or you would like to send us your CV to look over please feel free to use the form below. Document formats accepted are doc, docx, zip and pdf with … END_OF_DOCUMENT_TOKEN_TO_BE_REPLACED 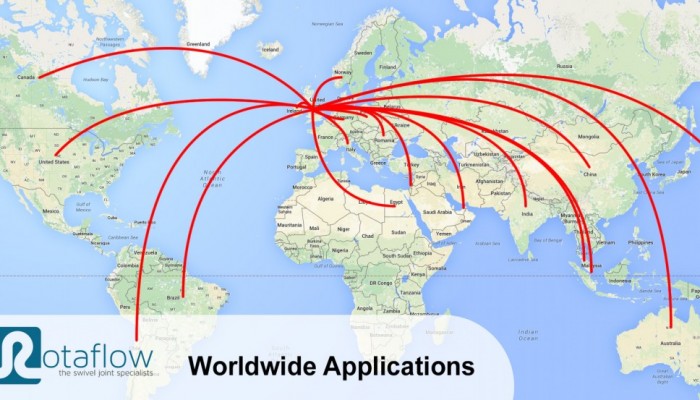 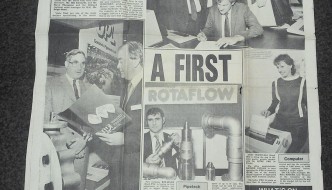 1982 Rotaflow started as a sole trader in Furness Vale 1984 Converted to a limited company “Rotaflow FV Ltd” and obtained our first patent for our unique swivel design. 1985 First 4" swivel joint 1990 Moved into our purpose-built factory: … END_OF_DOCUMENT_TOKEN_TO_BE_REPLACED